Cold weather and lack of daylight can lead to a mild case of the winter blues or more serious seasonal depression. And while it’s common knowledge that exercise boosts mood, movement routines specifically designed to release negative energy and emotions may do even more to foster emotional well-being.

One of these is Yoga Meets Dance Studios in Northeast Minneapolis, a trademarked program that fuses gentle yoga, dance, and guided relaxation and is specifically designed to facilitate emotional release. “The way we move is an expression of our emotional field,” says instructor Catherine Liska “When we change the way we move, we shift the emotions we’re able to allow and express.”

On a recent evening at Girasole, students stretch arms toward the ceiling as the winter moon shines weakly through the window. Liska is accustomed to witnessing moments of release and breakthrough in her classes. She finds that participants are often in tears by the end of a session, having wordlessly experienced and expressed a slew of feelings, facilitated by uninhibited movement, music, and healing meditation. “It’s designed to help people drop into their bodies and play—to be fully vibrant and alive and then completely let go and relax,” she says. 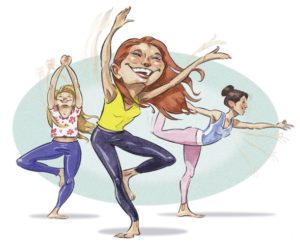 Barbara Nordstrom-Loeb, a local marriage and family therapist and dance/movement therapist says, “There’s a lot of talk about the connection between mind and body, but from my perspective, it’s an artificial distinction. Our minds, bodies, psychology, emotions, and spirituality are one unified system, and changing one component changes the whole.” Emotions are a physical experience, she explains: “We know we have emotions because our bodies tell us. The neurophysiological truth is that we are moving, feeling beings first and thinking beings second.” You don’t conjure the conscious thought I’m in love until your physical responses to a person’s presence (or absence) have let you know.

Many academics are looking into this idea. A recent Finnish study found evidence that emotions are linked to sets of physical sensations, the mind’s recognition of which tells it what it’s feeling. Subjects were presented with the outline of a human body and asked to paint it to represent how their bodies felt when they conjured feelings such as happiness, fear, sadness, and anger. Subjects across a wide range of cultures reported remarkably similar sensations associated with each emotion (sadness felt like warmth in the throat and coolness in the limbs, for instance). The theory is that the physical experience of an emotion precedes the mind’s recognition and labeling of it.

Bodies don’t simply transmit emotion, however. They hold it, too. A study at the Harvard School of Public Health found that chronic negative emotions, such as anxiety, anger, and depression, may lead to the development of coronary heart disease. “There’s nothing wrong with anger,” says Nordstrom-Loeb. “Anger is just energy; what matters is what you do with it. Gandhi was an angry man who transformed the world. Someone else might put a fist through a wall.”

Anger is just energy; what matters is what you do with it.

Liska says that movement has the power to transform emotional states of being. She describes chest-expanding movement exercises in one dance class that caused some participants to experience such strong feelings of vulnerability that they essentially crumbled in on themselves. Liska works with such individuals to gently guide them into developing trust in their emotional safety and confidence in their resiliency. “When we try on new movements, we try on new emotions and new ways of being in the world,” she explains.

Watch her video Meditation to Separate Thought From Emotion on Vimeo. 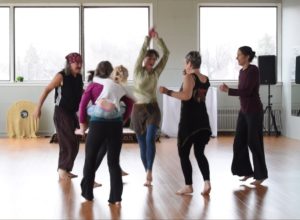 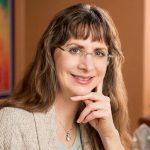 2 thoughts on “Exercise as Therapy Session”