Solar Flares, Planetary Evolution and YOU!!!

Have you been curious about solar flares and their effects? We often talk about the magnetic pull of the moon on the earth, but what about the sun? 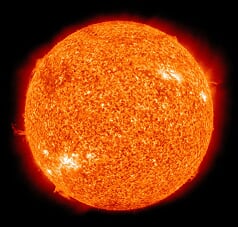 During many years of yoga practice I had become very aware of how the cycle of the moon was affecting me physically and emotionally, but in 2013 I began to notice that I would be suddenly “out of sorts” emotionally and physically without any kind of warning. I was very frustrated that all my old “tools” did not seem to be working. When I mentioned this to a friend she said “well, you know we had a huge solar flare yesterday – maybe that’s affecting you”. That spiked my curiosity. Over the next year I began to pay attention to solar flare activity and realized that I literally experienced a physical reaction that made me feel both wired and tired while also causing me to feel more emotionally charged whenever there was a solar flare!

October 2019 ended the most recent 11 year cycle of solar flare activity – 5 ½ years of increasing number of sunspots peaked in April 2014 followed by 5 ½ years of decreasing number of sunspots. The more sunspots,the more disruption occurs within the magnetic field of the sun, and this cycle has been documented for over 250 years. We are now beginning a new phase of increasing solar flare activity that will peak in 2024. For more info see www.livescience.com/new-sunspot-solar-cycle-begins.html

Because I am a “yogi”, I decided to research those teachings to find out more information the sun. I found that ancient sages, shamans and yogis all predicted that we will see much Solar Activity during the transition from the Piscean Age to the Aquarian Age, which has been occurring since the turn of the 21st century. Many people are in agreement  that we have now officially entered the Age of Aquarius and are transforming into a new paradigm of equanimity between male and female, recognizing that all individuals are interconnected and have both feminine and masculine qualities that are both necessary for a balanced and harmonious life.

In my research I found that the vedic scriptures describe light as a source of purification, information and connection to “Brahmin”, the “One”- the impersonal divine reality of the universe, from which all being originates and to which it returns:

“…In the beginning Brahman was all this. He was one, and infinite; infinite in the East, infinite in the South, infinite in the West, infinite in the North, above and below and everywhere infinite. East and the other regions do not exist for him, nor across, nor below, nor above. The Highest Self is not to be fixed, he is unlimited, unborn, not to be reasoned about, not to be conceived. He is like the ether (everywhere), and at the destruction of the universe, he alone is awake. Thus from that ether he wakes all this world,which consists of thought only, and by him alone is all this meditated on, and in him it is dissolved. His (Brahmin) is that luminous form which shines in the sun, and the manifold light in the smokeless fire, and the heat which in the stomach digests the food knows this becomes one with the one.”
Pg. 318, Chapter 12: Maitrayana-Brahmana-Upanishad, translated  by F. Max Muller, 1884

Just as solar flares from the Earth’s Sun affect the magnetic field of the Earth, they also affect humans primarily at our Solar Plexus, midway between the navel and bottom ribs in the region of the stomach. Solar Plexus literally translates as the “network of nerves that acts as the sun”.

Every human is designed with our very own little sun that is being “flared up” every time the Earth’s Sun flares, and this give us each a chance to purify ourselves so that we can more deeply connect with our Divine Self.

Each solar flare brings forth more of our buried emotions and traumas that have been stored in the cells of our body so we can feel and process through them, thus receiving insight and information about our “personality self” and how it sabotages our connection to our “Divine Self”.

Feelings that seem to come “out of nowhere” are actually unresolved emotions and traumas from this life and past lives breaking through into our consciousness so that we may evolve and upgrade our nervous system to handle higher vibrating frequencies of solar energy that is part of the conscious evolution of our planet, solar system, galaxy and cosmos. Unfortunately, it often does not feel like this is a blessed opportunity as solar flare symptoms make our physical body very uncomfortable!

Although theses surges of emotion caused by solar activity can trigger the nervous system into a high sympathetic response (fight, flight,freeze), it is possible for a person to nurture her/his body and mind with activities that assist in resetting the physical body and mind to a more parasympathetic state of equanimity. With the right tools, solar flares are an opportunity for each of us to expand our human consciousness in a profound, beautiful way:

As solar flare activity begins to increase again, I am sharing this simple yoga practice that combines rhythmic movement and the natural electrical currents of our hands to transform energy that get stuck at the solar plexus and manifests in unresolved “emotional commotion”. This meditation assists the body/mind in releasing emotional toxins to clear and renew our physiology by strengthening our nervous system and transmuting the unresolved energy at the solar plexus.

Yoga Bhajan taught us that this meditation will offset the effects of the solar flares by capturing and transmuting the excess solar plexus energy while stimulating our pituitary gland to assist us in navigating through life with more ease.

Anger is a catalyst for change….use the feeling of anger or frustration as fuel for transformation by transmuting its energy with your hands at your solar plexus.

‍Before beginning take a moment to connect with your Inner Teacher using this simple sound current that means “I honor the Infinite Creative Consciousness and Divine Wisdom Within All”:

It is important and very helpful to fully warm up the spine and limbs before beginning a meditation to prepare the body for the experience.

With eyes closed, rhythmically repeat the following 4 hand positions, holding each position briefly, for a total of either 3 or 11 minutes, breathing through nose.
see video for 3 minute practice: https://vimeo.com/400465780 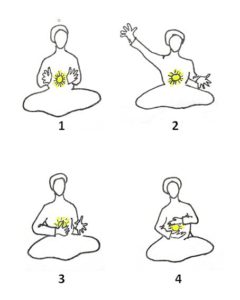 Inhale deeply, press palms together in front of heart hold breath 10 counts while squeezing the hands and all the muscles, exhale through open mouth. Repeat 2 more times. Sit quietly to observe the effects of the meditation, breathing through your nose, for 1-2 minutes.

Thank yourself for taking this time to nurture your body, mind and spirit.

To conclude, I share these beautiful words about the cosmic field of light from a biography about the theoretical physicist, David Bohm:

“…so the cosmic field of light is really an a synchronous flow of electromagnetic waves converging at every point to create standing wave patterns. The photons that are emitted from every source (whether as radiation such as from stars, or reflection such as from planets) are carrying information about the source itself – its location in space and time its color and temperatures, its atomic and molecular composition, its speed of rotation and direction of movement, etc. It is only because this information is carried in the photons that it is possible to see in visible light, and observe through instruments, in non-visible frequencies,anything in the cosmos. The light field is most importantly a field of information. As Bohm said, there is meaning at every level of existence, from the quantum to macrocosmic. From this perspective, the particle (i.e. electron) would seem to be gathering information about its environment and responding according to the meaning of the information.”
excerpt from “The Essential David Bohm”, edited by Lee Nichol